Essentially, debates like the Kalam cosmological argument or the watchmaker analogy, typically place emphasis on claims that play on intuition. For example, since Christianity arrived in Europe people started crediting God for anything good that happened in their lives and the Devil was the cause of the bad. Modern religious minded folk are doing the same to this day! The evangualist philosopher, William Lane Craig, stressed that it's obvious how everything with a beginning, was, in fact, caused by an almighty Abrahamic god, or likewise, they attribute marvels of nature to intelligent design. It's never ending: what always follows is that God did it if it is good. Even the cosmological assertion that the universe must originate with some kind of non-material, all amazing God who existed before time itself came to be, is realistically, the same religious psychology.

Here are the simplified key points for cosmological arguments and my responses to them:

1 Everything that has a beginning has a cause.

This is often made to look like a no brainer because, again, it appeals to common intuitions. On the contrary, a beginning, be it created or a by-product or an accident can have one, none or many causes. When you question causality, not everything that starts has any one definitive cause, because, in reality, we all anecdotally prescribe causes for everything! Rarely do we actually uptake a discipline of unbiased study to identify specific, individual causes for everything that happens. Causes even evade modern professional disciplines, for example, when experts talk about the start of cancer development, explaining the numerous contributing carcinogenic factors, causes get lost in the mess of multiple possibility. It's similar with unstable random biological mutation, because there's rarely no one clear cause when an organism might evolve or devolve.

For the sake of this point, let's say apparitions are spirits that manifest from nothing; we humans aren't exploiting any trigger devices to conjure them up, it's purely supernatural phenomenon. We can call apparitions random, but also personal experiences, much like many personal ideas of God across the world. Denying the existence of apparitions weakens the argument for a religious apparition like the Holy Spirit, angels and God, which, discredits a cosmological argument for a creator. On the other hand, keeping within the scope of this context; the acceptance of manifesting apparitions acknowledge that not all things with a beginning have a discernable cause—the paranormal phenomena would hold mysterious causality. These debates get tiresome.

We can question what might cause things to begin all day, starting with acute onset schizophrenia or other drastic human personality changes—they often lack a cause. By saying 'everything that has a beginning has a cause,' we can miss other 'numerous contributing factors' that contribute to a change within any system, state or form. Alterations of form seen in the double slit experiment during measurement/observation of waves, for example. The cause of flattening waves are not fully known. There is nothing obvious about causality in this example, despite William Lane Craig's use of the word to appeal to popular intuition concerning his view on causation. These arguments can be too 'dodgy car salesman' and not enough unbiased progression.

2 The universe has a beginning

Again, we don't know. It is an agnostic position is honest here. Scientists don't all agree if or how the universe began. The period called the big bang is a blank period. It wasn't even a bang because sound doesn't travel in space! Moving on; if time began with the big bang–which is popular in physics–then time didn't exist before the big bang. suggesting the universe couldn't have been created. Reaction times as well as thoughts can be timed. Planning, creating is a temporal activity and it all has motion, resonation and concentration. The universe might not have a beginning. Much of the universe is unknown and ideas of multiverse are holding sway.

3 The universe has a cause

Again no one knows and thus this claim cannot be measured or validated by the world's best scientists. Even if we say it was caused, we wouldn't even know how to discover the cause. The universe might not have a cause.

4 The cause of the universe is God.

Straight to the religious conclusion already? Which God you choosing? There are many of them, Brahma, Odin or Jupiter, perhaps? God, just like fairies, flying unicorns or werewolves, has never been proven to exist, this is why people with religious need dismiss a natural explanations. As previously touched on, Gods are arguably corporeal, spiritual and without mass, like how Socrates described our imagination before he died. It seems ludicrous how a matterless ghost is supposed to have created our universe from his primordial pretemporal stasis.

This is a non sequitur and a biased argument.

These argument's're also incompatible with christian gnostic theologies, panentheist perspectives and pantheism. It seems geared towards orthodox monotheism but does it a disservice. 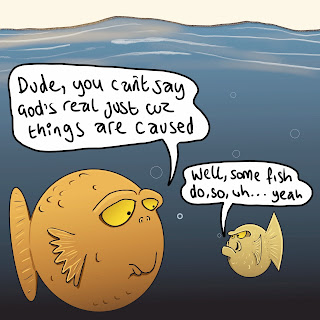